It’s hot. The Southern California sun beats down relentlessly as, beneath you, iconic scenes from Drive and Terminator 2 play out on a gully of barren, sun-bleached concrete. 18 miles to go, you tell yourself; just 18 more miles to the waveless waters of Long Beach.

Dramatics aside, this is a pretty apt description of the Los Angeles River’s longest contiguous bikeway. Extending from the rail yards of Vernon to the lighthouse on Shoreline Aquatic Park, it’s one of a sparse few means of delivering downtown cyclists to the Pacific Coast, and the only one that can do so sans street traffic. For this reason alone it’s well worth saddling up to pedal the nearly 20-mile bike path.

As far as scenery is concerned, however, let’s just say that your LA River ride is going to leave a lot to be desired. Which is saying something, considering the fact that the city’s list of bikeable waterways is a fairly short and unattractive one to begin with. But whereas rivers like the San Gabriel, Rio Hondo, and even the Glendale Narrows (which is another bike-friendly section of the Los Angeles River) offer some modicum of greenery to beautify the route, just about the entirety of this 18-mile stretch is cement and power lines as far as the eye can see.

Find the Perfect Bike for your LA River Ride: 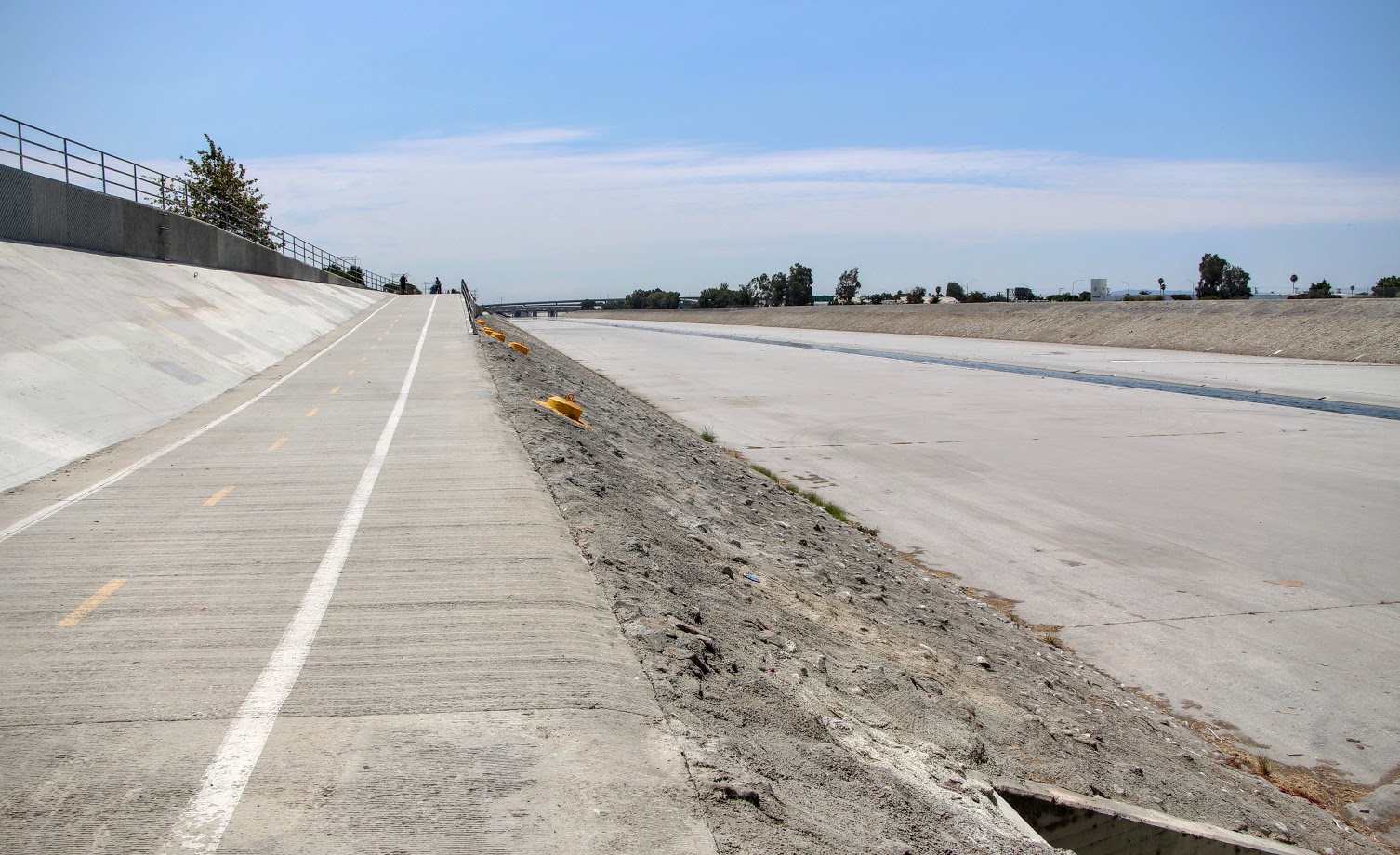 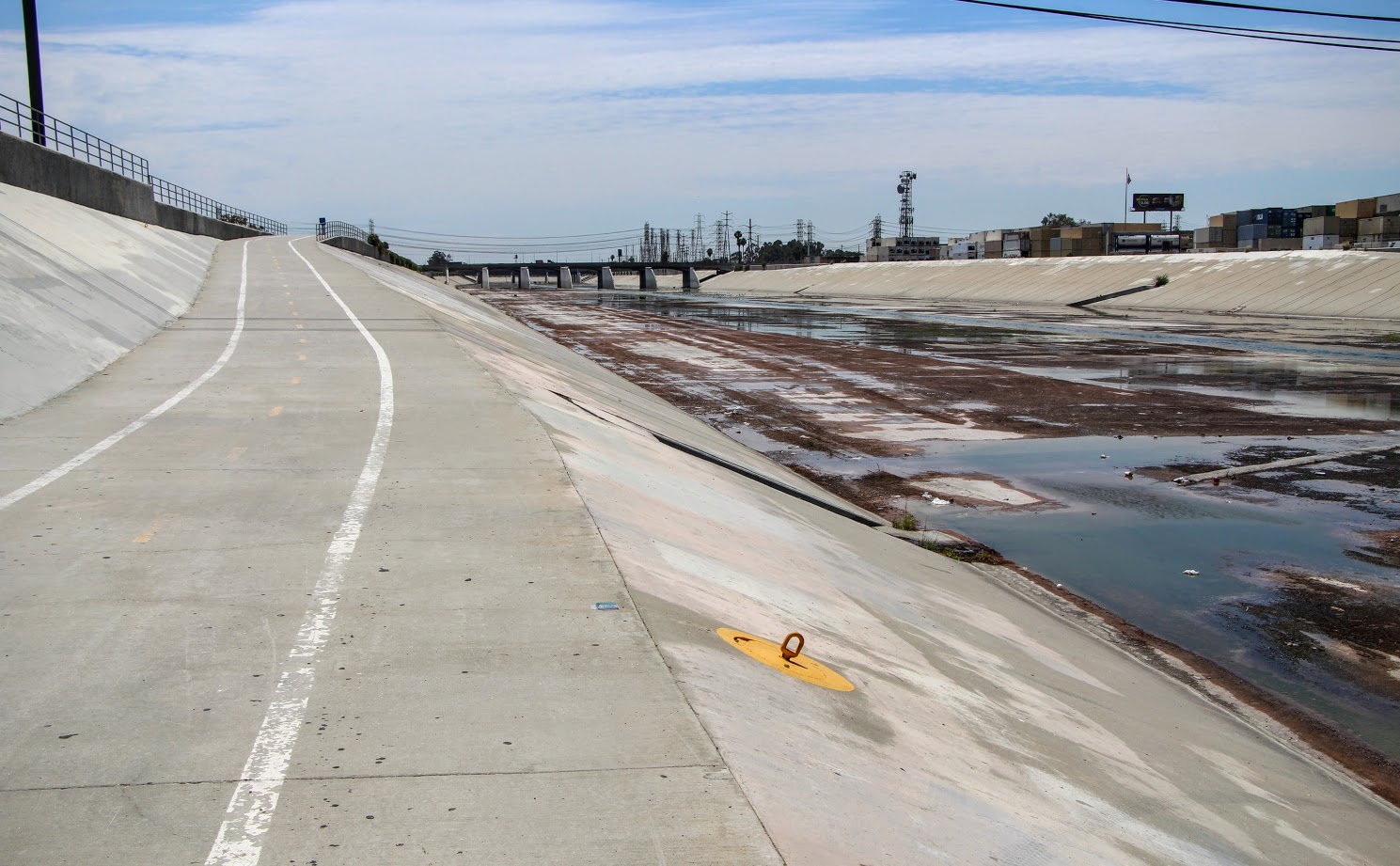 Cheer up, though, it’s not all bad. What the LA River Path does it does quite well, providing one smooth, unbroken expanse of car-free bike riding through southern Los Angeles county. From the northernmost entrance on Atlantic Boulevard to the Imperial Highway Bridge, the trail follows along the west side of the river, passing alongside neighborhoods like Maywood, Bell, and South Gate. The overpass at the confluence of the Los Angeles and Hondo Rivers marks the only variation in an otherwise break-free ride, continuing in a straight shot south for 12.5 miles upon crossing over to the eastern banks. 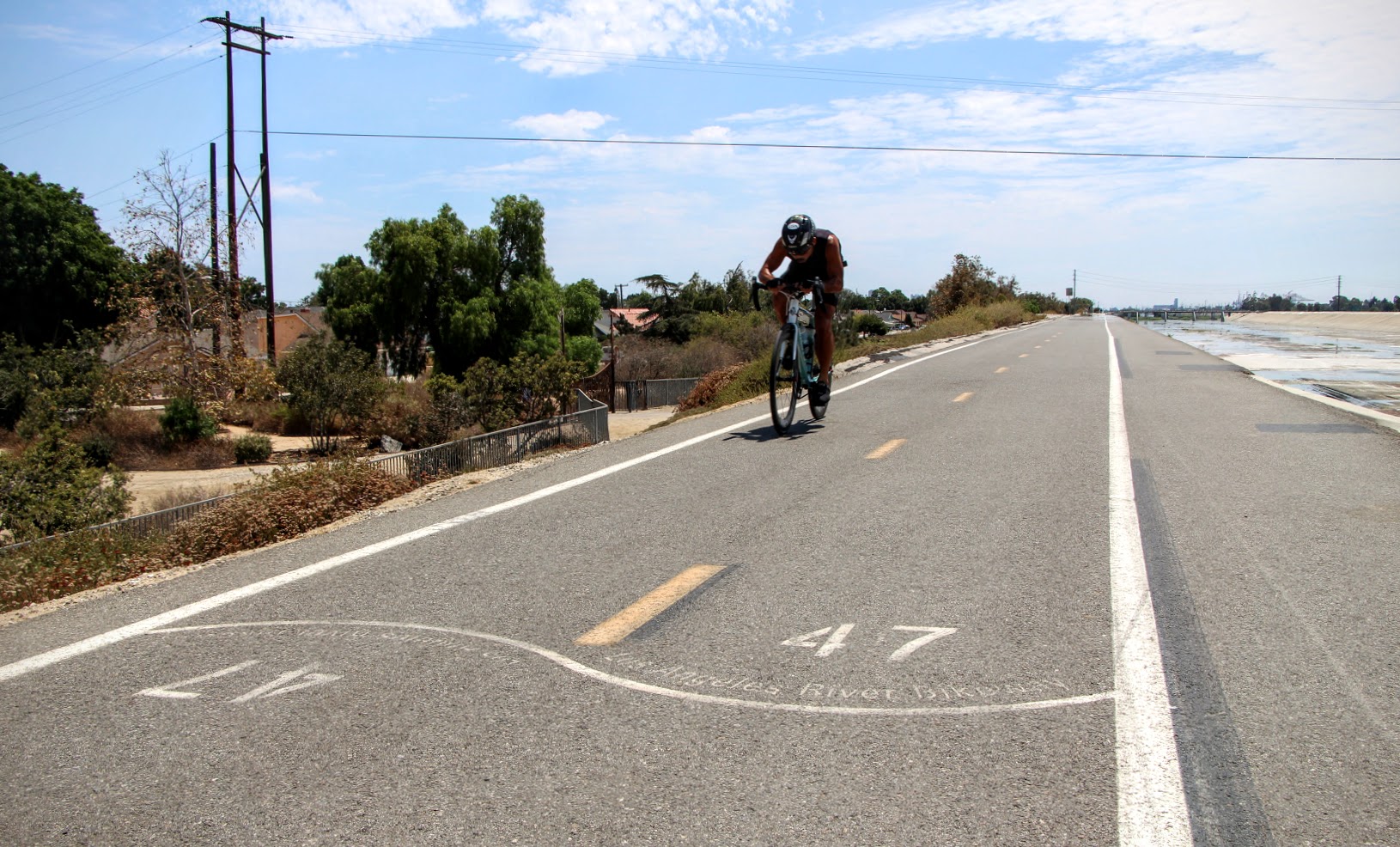 As the trail nears Long Beach, the Los Angeles begins to take on a significantly more river-like demeanor, transitioning from a nearly-dry riverbed to what can only be described as an inundation by SoCal standards. 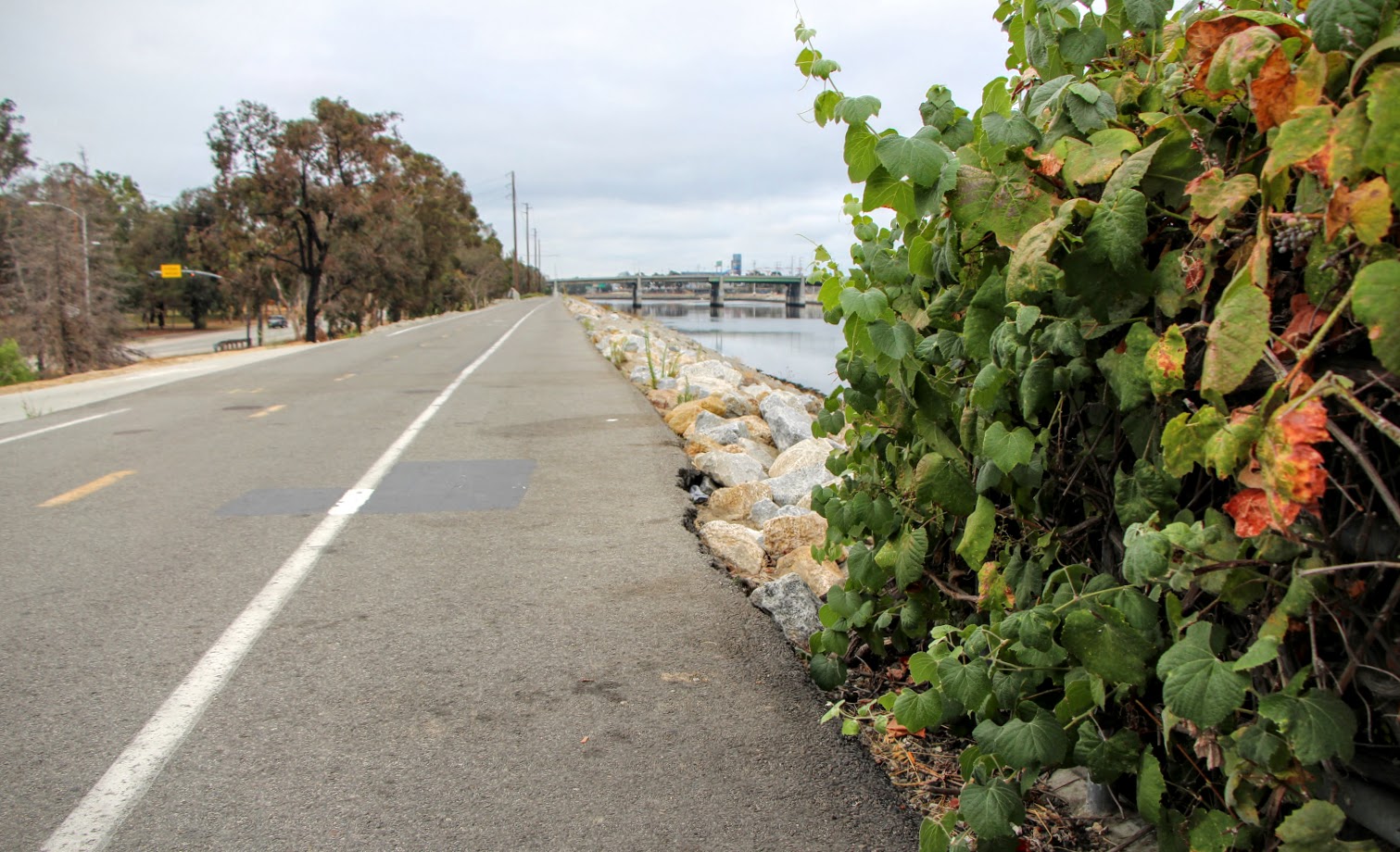 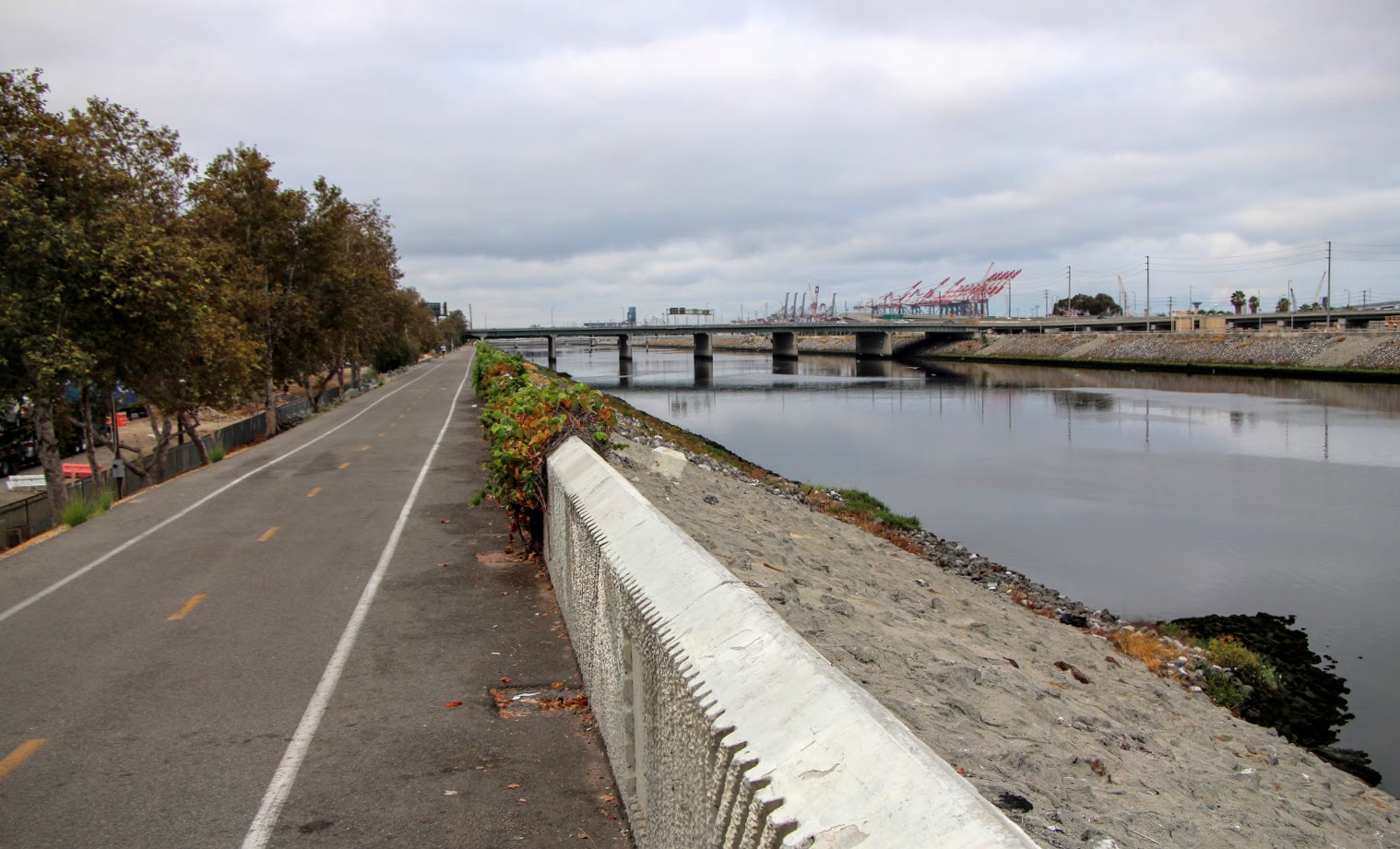 It’s an apt harbinger of changes to come once the river meets up with the Queensway Bay. Suddenly grass and foliage replace stone and high tension wires, and before you know it you’re pedaling alongside quaint lampposts in view of the Queen Mary ocean liner. 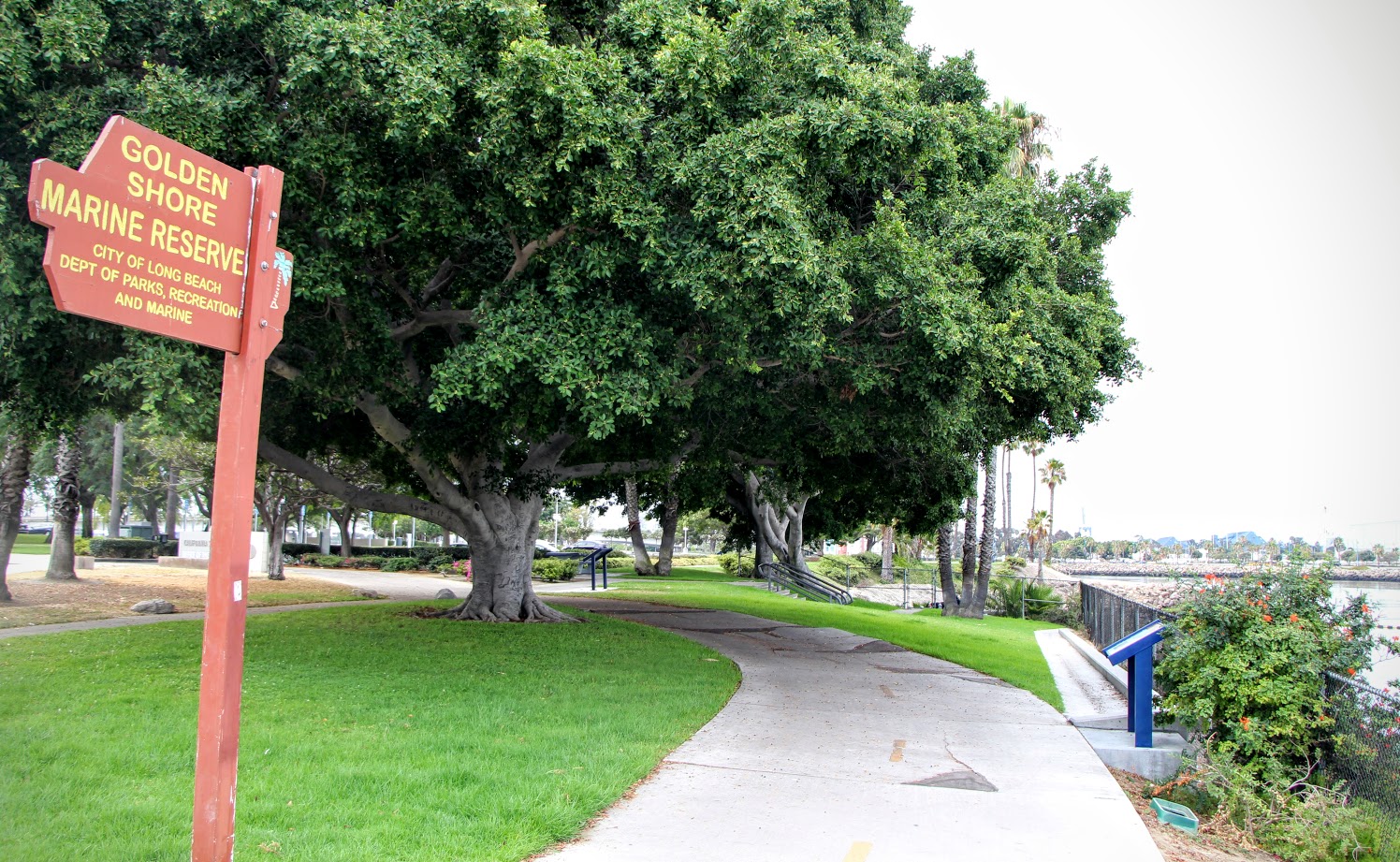 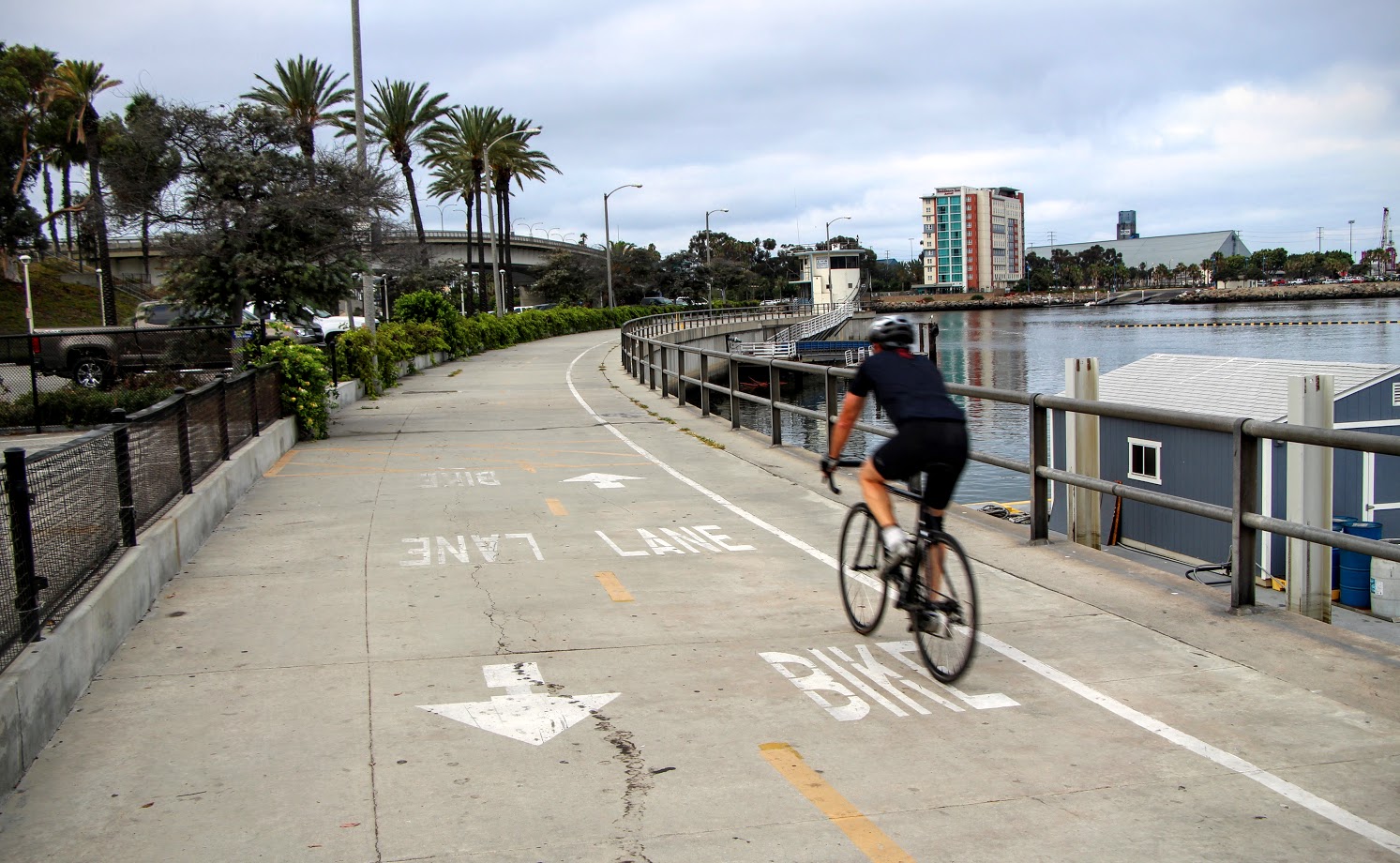 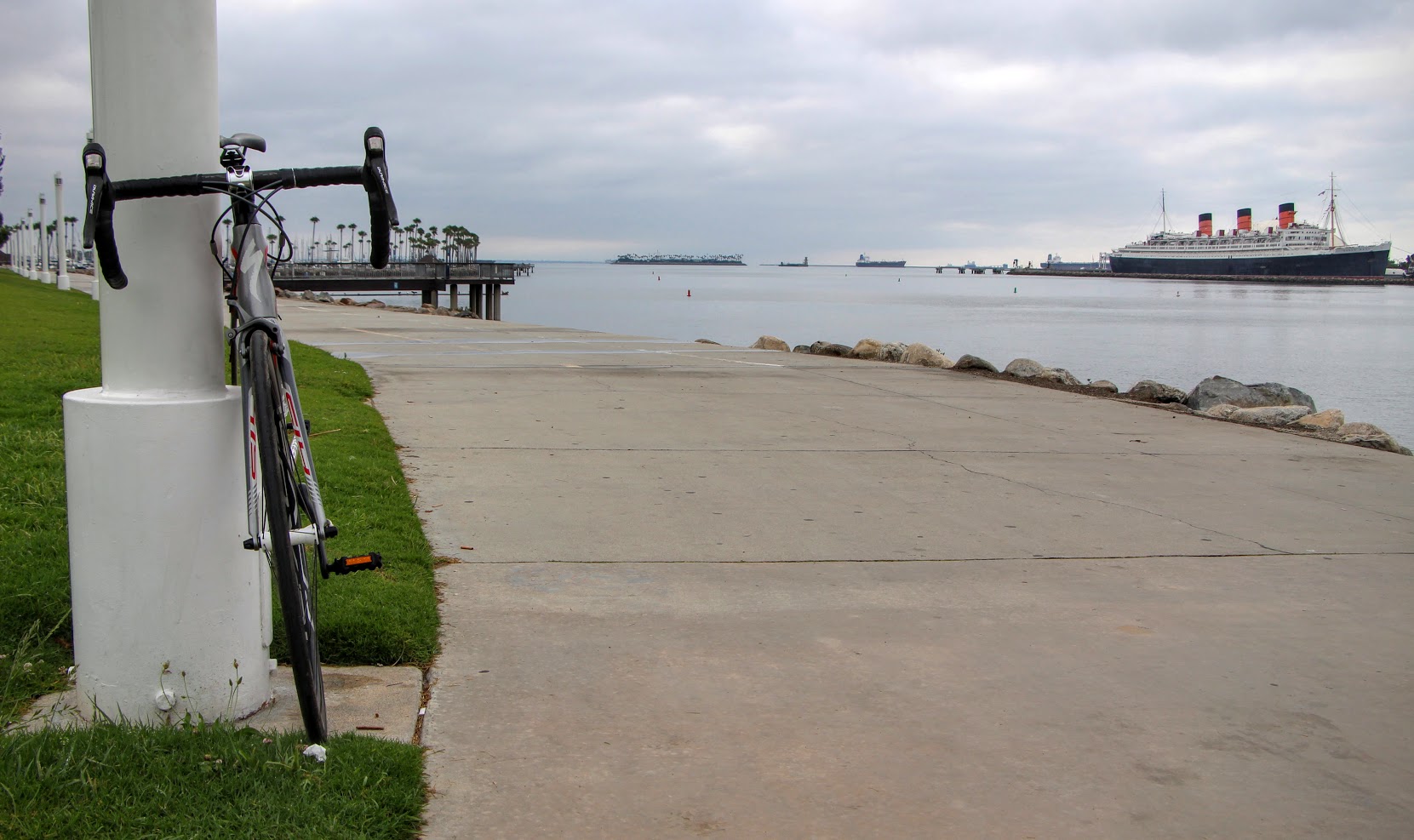 Though the bike path technically “ends” at the Shoreline Aquatic Park, you can continue along the water’s edge to the start of the Long Beach Shoreline trail if you feel like tacking on an extra 4 miles to your ride. Otherwise, park your ride at the base of the lighthouse and take in those classic Pacific views. After all that blase urban topography, you’ve earned them. 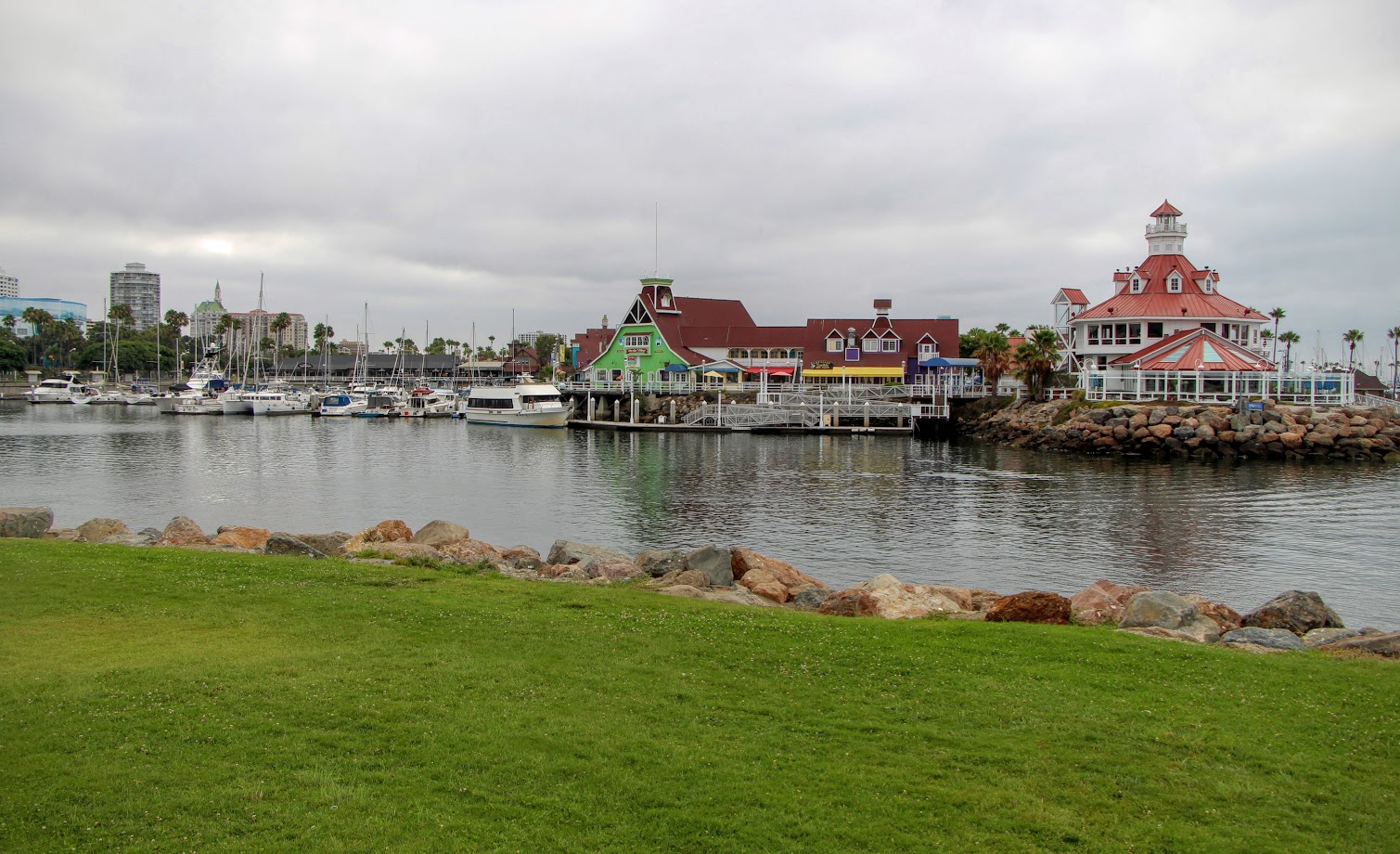 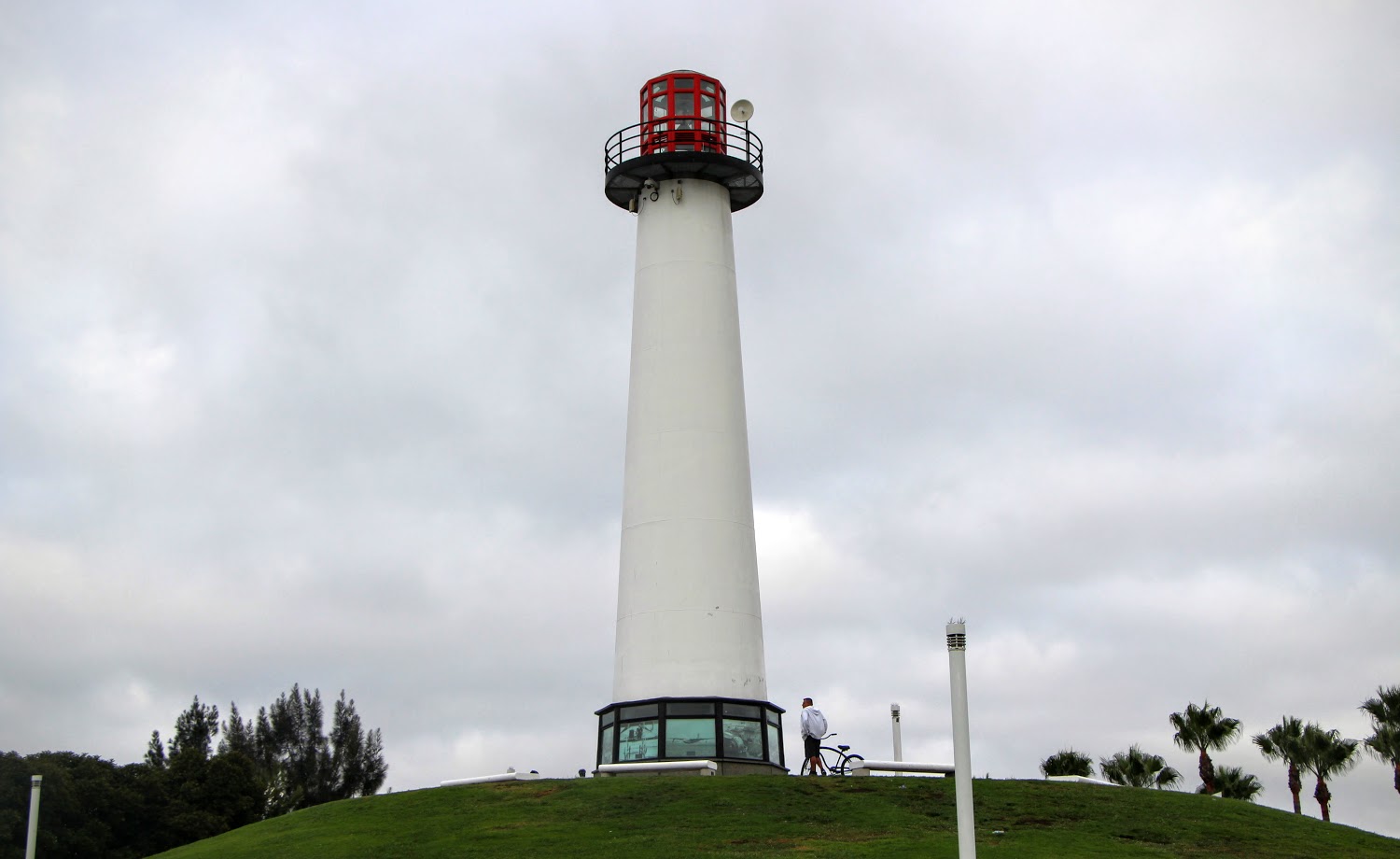