When you’re not from the area, planning a successful night out by bike in a city like Paris can be an intimidating prospect. Sure you could just wing it, but more than likely you’d miss out on a ton of memorable possibilities. Besides, if Moulin Rouge has taught us anything it’s that Parisians have a distinct distaste for evenings spent subjected to mediocre entertainment.

So what’s a foreign cyclist to do? That’s what we’re here for. Below you’ll find a quick and easy introduction to some of the Right Bank’s most engaging neighborhoods, as well as Spinlister’s picks for the best street in each to get started on. We’re talking everything from authentic fromageries to local dance bars blasting 90’s French pop.

Don’t forget to check out our Left Bank article as well, and once you’ve gotten to know the basics be sure to click on Spinlister’s detailed bike route to help you navigate a truly Parisian night on the town. Bonne Fête!

The wide open Place de la République has long been a central gathering spot for the people of Paris. Perhaps most memorably, it was the site of the enormous midnight vigil held after January 2015’s Charlie Hebdo terror attacks. It’s fitting, then, that this social atmosphere has carried over onto nearby Rue Oberkampf, which has blossomed into one of the city’s most beloved and well-frequented bar scenes. You won’t find anything particularly fancy here, just a 500 m stretch of road between metro stations Parmentier and Ménilmontant lined with funky nightlife venues, take away food, and roaming tribes of revelling 20 and 30 somethings. And that’s just how the Parisians of the 11th arrondissement prefer it. Come as you are and enjoy the atmosphere.

*On weekends, if you’re in an unpretentious dancing mood, hit up the quaint, energetic, and highly underrated La Gouttière on neighboring Ave. Parmentier. 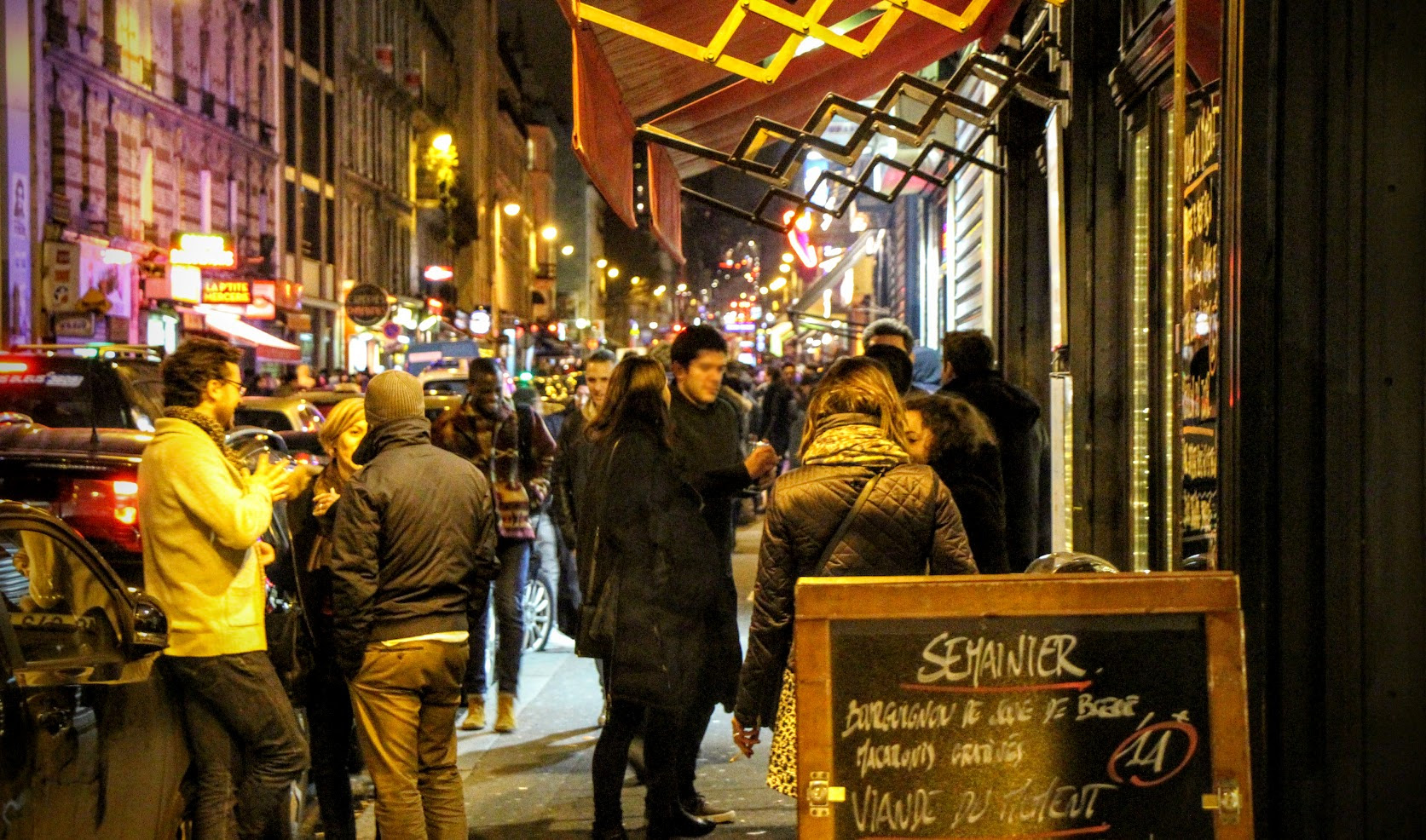 Just north of Châtelet/Les Halles, the Montorgueil neighborhood is probably what you imagined all of Paris to be like when you were a child. With its quiet narrow streets, Haussmannian-inspired apartments, and quaint open-air shops, you’d almost expect to see Gil Pender and Ernest Hemingway stroll by locked in literary discussion. To make the most of this classic Parisian setting, head over to the cobblestone Rue Montorgueil. Framed at the northern end by its telltale green gate, this fantastic street offers one of the most enjoyable dining experiences in Paris. From its myriad boulangeries and fromageries to an impressive concentration of restaurants and bistros, to eat here is to revel in all the things stereotypically French. This is one cliche you shouldn’t be ashamed to experience at least once. 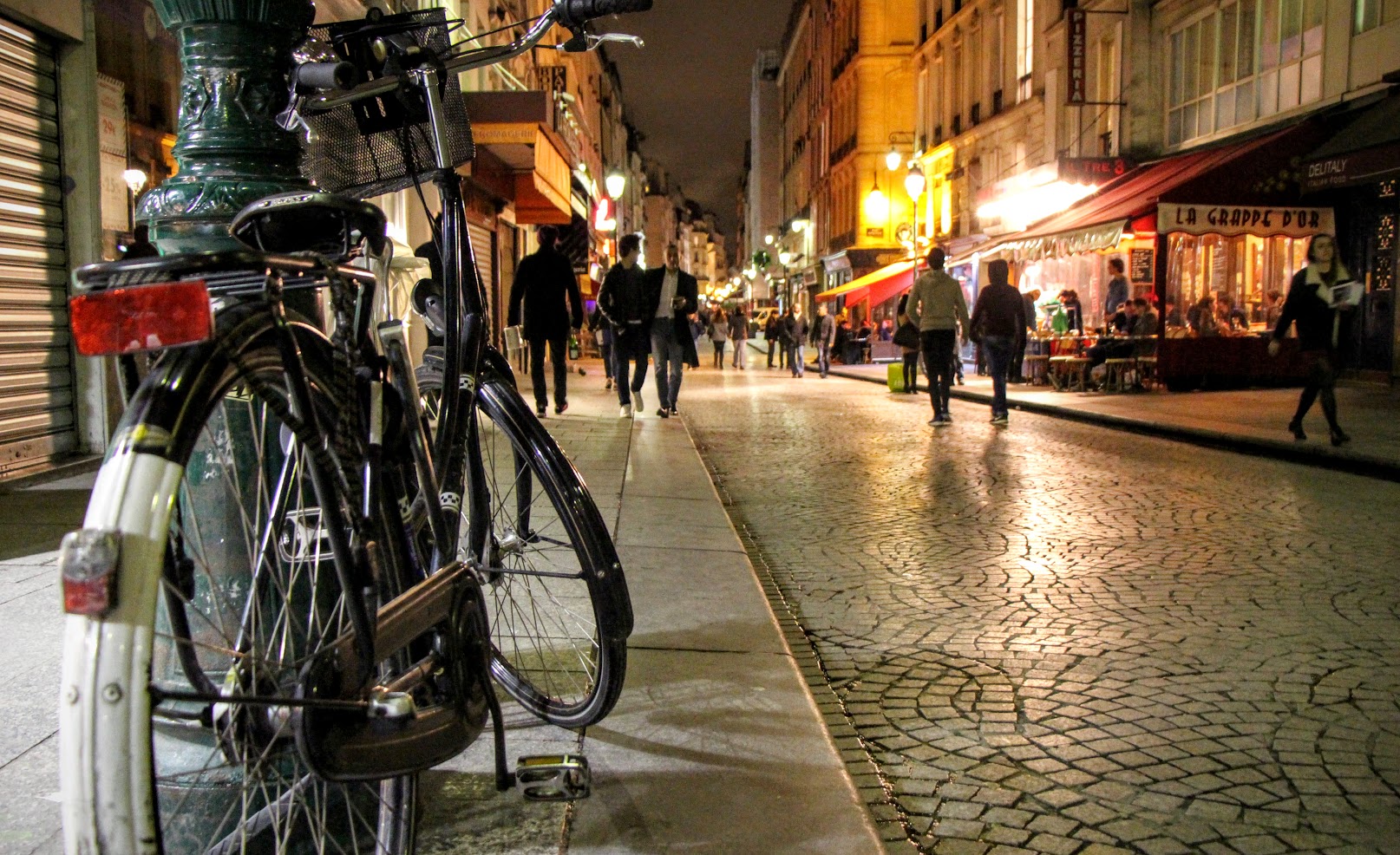 Oh how the times do change. Once the site of France’s most notorious prison, this neighborhood straddling the border of the 11th and 12th arrondissements is the definition of modern Paris, blending the historic and the hip in all the right ways. You could, for example, content yourself with a stroll around the famed Place de la Bastille, taking in its towering July Column and neighboring Opera House before making your way down to the tranquil Bassin de l’Arsenal. Once the sun goes down, however, the atmosphere takes a turn for the lively. We’d recommend starting with the wildly entertaining Rue de Lappe, which constitutes one of Paris’ most tightly packed avenues of bars, clubs, and restaurants. Simply follow the crowds down the length of this narrow, 300 m corridor and duck into the scene that most appeals to you. There’s a little bit of everything here. 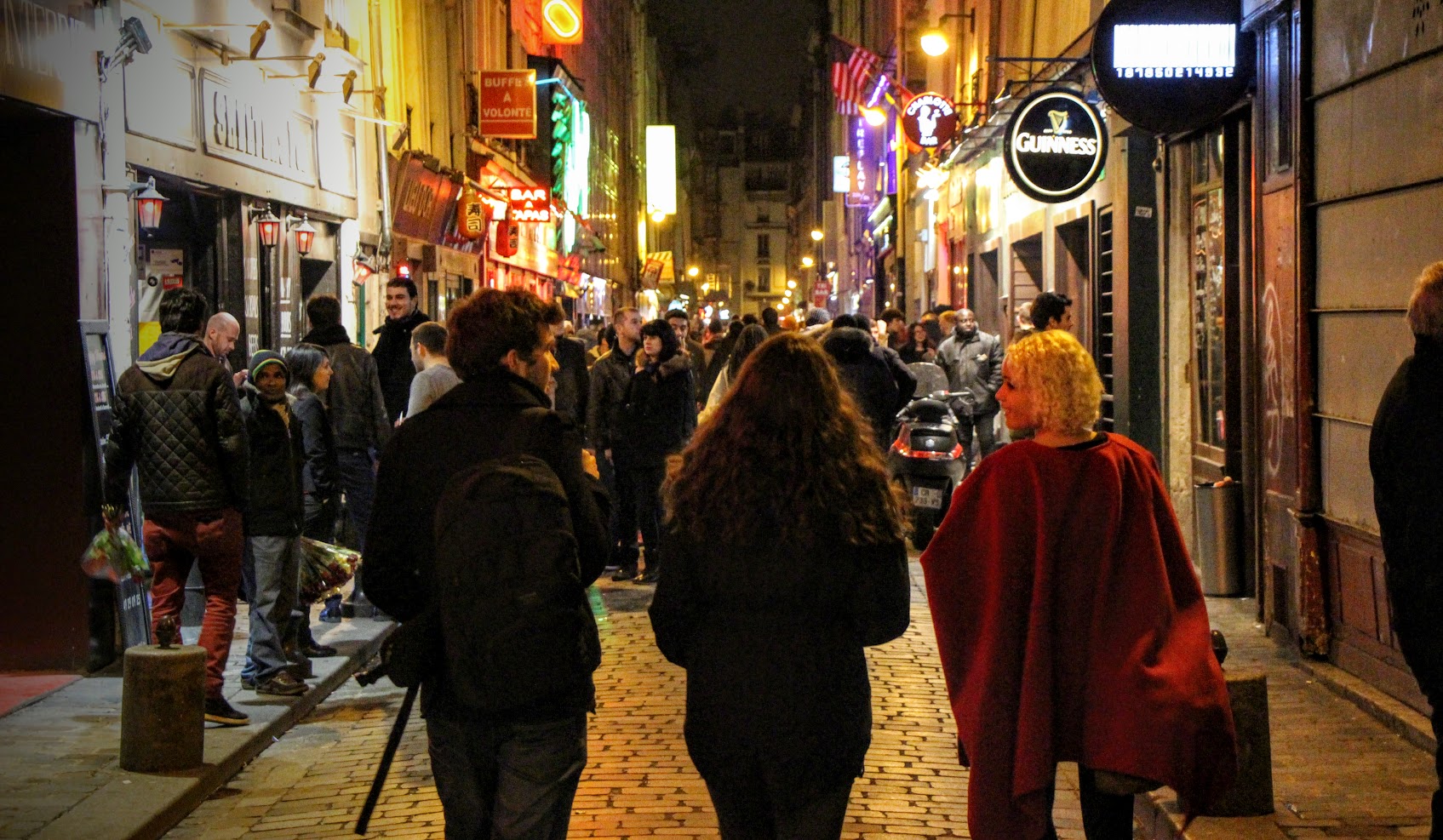 Ah Pigalle, long known as Paris’ irreverent and unsavory district of artists and adult entertainers. These days, however, the area’s admittedly seedy atmosphere has been brought into the folds of mainstream acceptance, as the burlesque dance halls and colorful sex shops of the Boulevard de Clichy have become almost as much of a tourist attraction as the stained glass glory of Sainte-Chapelle. What hasn’t diminished, however, is the neighborhood’s raucous energy. Starting from the Pigalle metro station, simply direct yourself west along the boulevard and take in the neon decadence.  After a short walk you’ll eventually arrive at the famed Moulin Rouge (and its Machine nightclub), but not before passing numerous bars and a few strip clubs along the way.

*If you want a truly unique Pigalle experience, head north from Boulevard de Clichy onto Rue Germain Pilon and tuck yourself into the back room of Marlusse et Lapin. A hidden gem of the 18th. 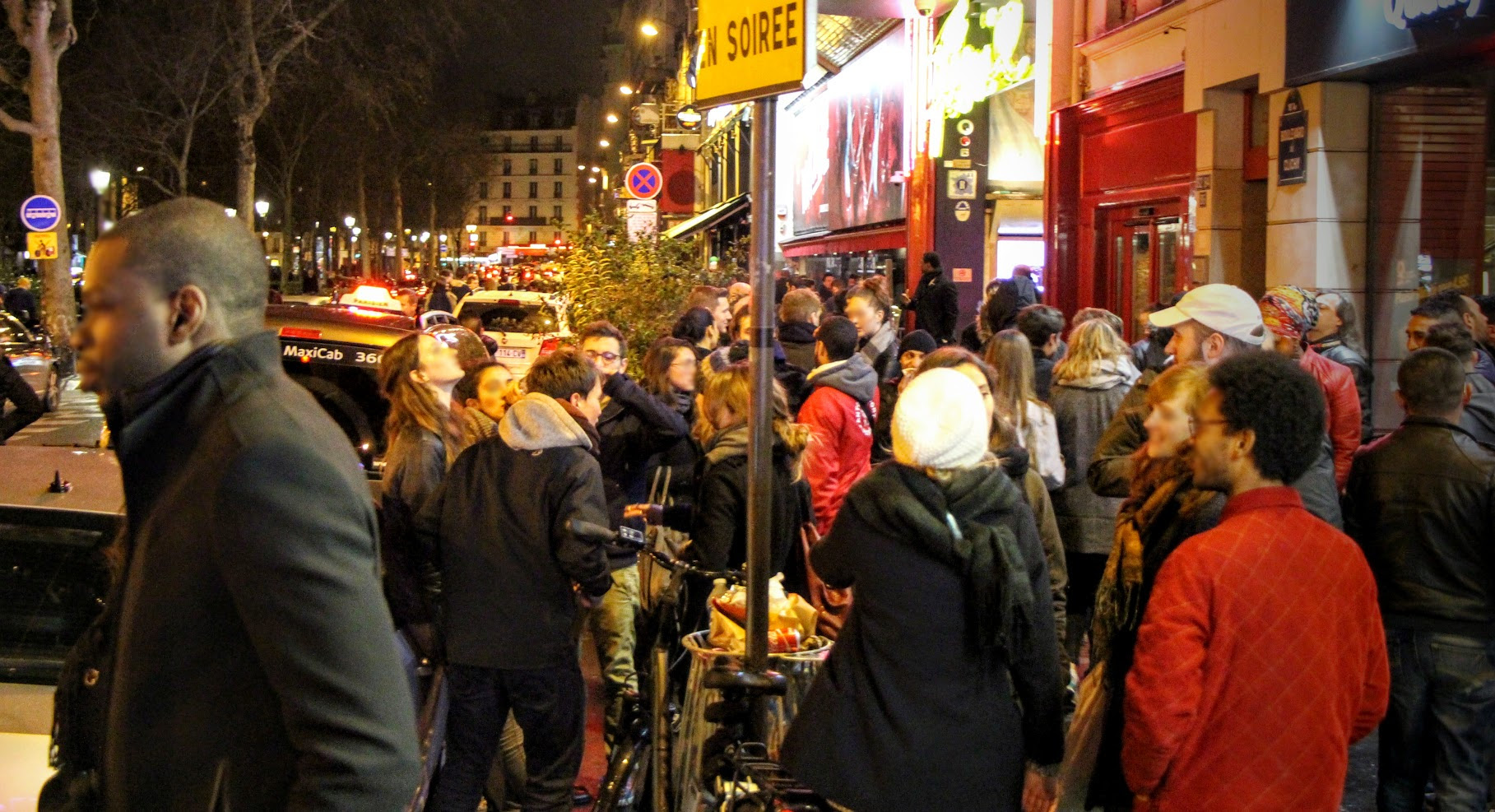 Few places in Paris offer the kind of people watching available around the 1st arrondissement’s Gare de Châtelet and Les Halles shopping center. Yes, it’s more than a little touristy and therefore lacks the kind of distinct neighborhood personality you’ll find farther outside the city center. On a clear evening, however, when happy hour rolls around (and yes, the French do appreciate a good 5-hour happy hour), you’d have to be a real stickler for authenticity not to appreciate this atmosphere. From the bustling Rue de Rivoli, just follow Rue Saint Denis northwards as far as the Fontaine des Innocents. All along the cobblestone street, as well as down its pedestrian tributaries, you’ll come across bar after cafe after restaurant offering competitive prices, ample outdoor seating and a flood of food traffic to gaze at as you sip a 5 euro cocktail. A lively place to start your night. 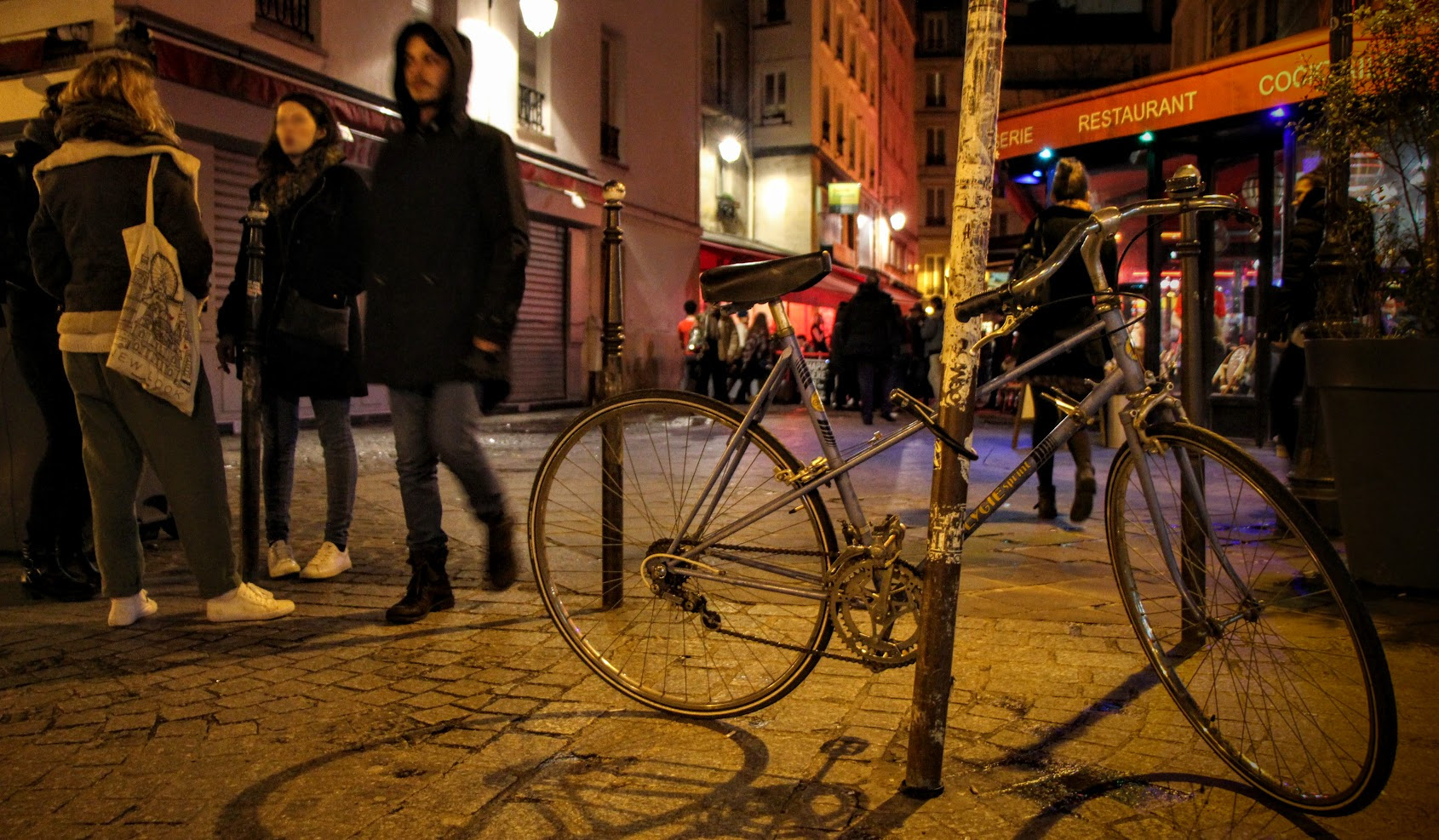 It will likely come as no surprise that Paris’ most renowned and luxurious boulevard has long been ground zero for high end clubbing in the City of Light. Names like Queen and Raspoutine boast posh interiors and the kind of exclusive clientele that would make a reincarnated, dance-savvy Louis XIV feel right at home. We should warn you, however, that if you’re planning on arriving to the Champs Elysées by bike it may be fairly difficult to gain access to any of them. Such is life in the world of glamor – a fact to which we proudly say, “Bike on, friends.” 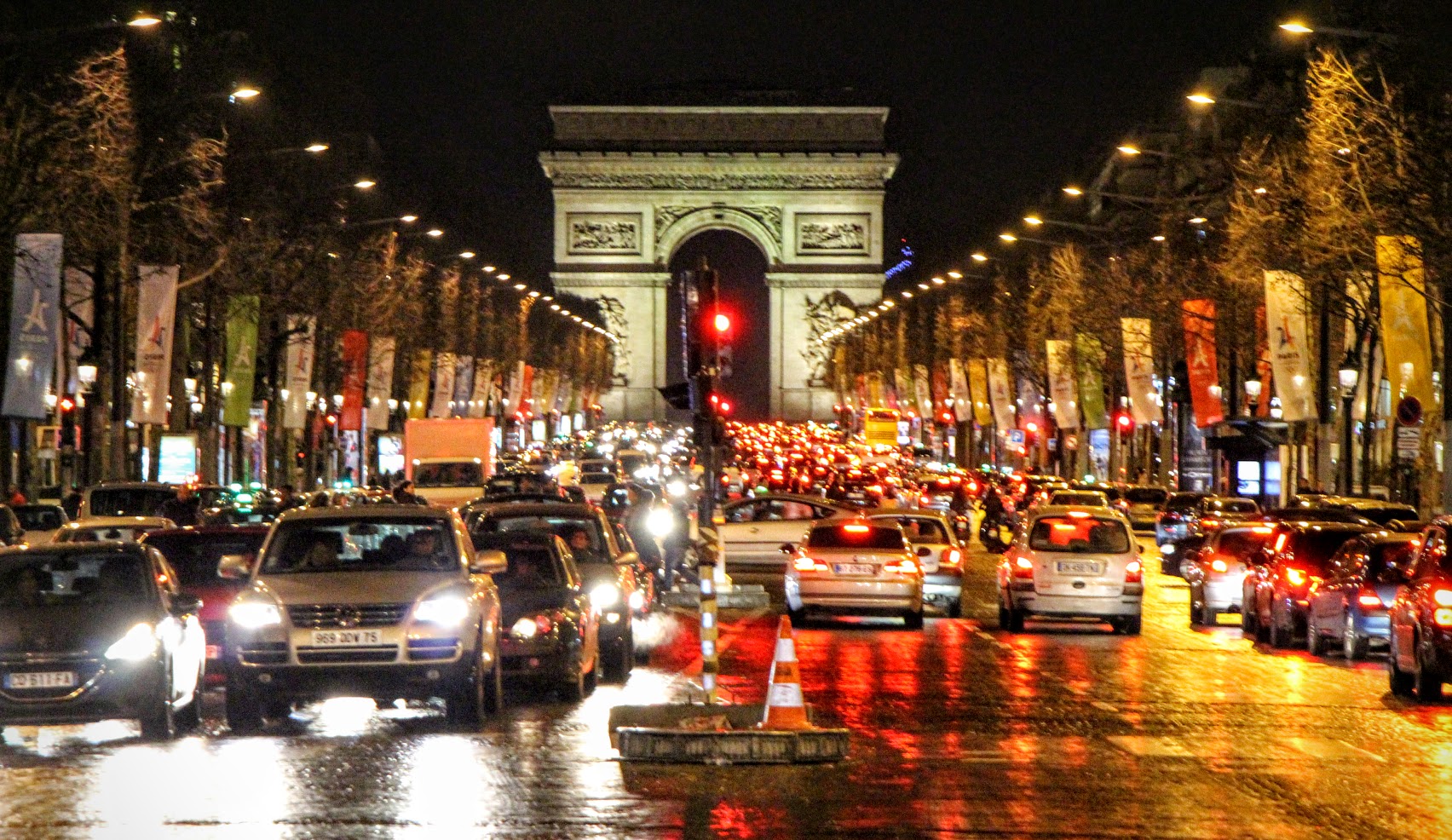 John Wachunas
John Wachunas directs content development and social media marketing at Spinlister. He is an avid traveler and published travel writer, as well as a co-founder and former content director at Embark.org.
Previous Post A Night Out in Paris: Biking The Left Bank Next Post The Surprising World of Paris’ Secret Passages